“Our stage will be the Offshore Oil Rig, Seraphix,

now a hellish recreation of the Moon Grail War.

This is a cage of ecstasy from which only one can escape.

Only moments remain until the base disintegrates.

And what is it that lurks at the bottom of this dance of Egos…?”

Chaldea has received a cryptic SOS dispatched from Seraphix, a distant oil drilling platform owned by Chaldea in the Pacific Ocean. What worse, when Chaldea attempt to verify Seraphix’s location with Sheba, the result was negative; it was as though the oil rig’s existence has ceases and they were unable to track the source of the SOS.

That’s when a mysterious A.I. by the name of BB hacked into Chaldea’s system and cheerfully announces that Seraphix has somehow been transported to the distant future of 2030 into the Mariana Trench, where it has been sinking for a while and that she is here to help.

BB then informs that she'll use her hacking skills to allow Chaldea's Rayshifting system to transport the protagonist to the future for this occasion. 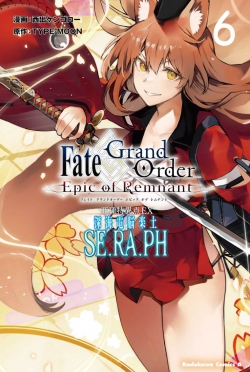 You must be logged in to perform this action.
Reviews (0)
Fate/Grand Order: Epic of Remnant - Shinkai Dennou Rakudo SE.RA.PH
Chapter Progress[Edit]
By editing the chapter progress, this manga will be switched from auto to manual mode. This means no highlights and checkboxes will work for this manga.
Notes
10000 chars remaining
Cancel Save
Write a Review
Reset Filters
You must be logged in to rate and post a review. Register an account to get started.
Privacy Policy | Terms of Service | Contact Us
© 2022 Scan Updates